The Baltimore Riots; Racial Oppression? or Lack of Biblical Parenting. 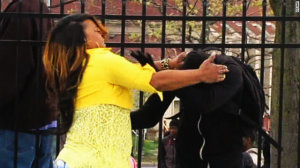 Watching Megyn Kelly on Fox News ask (via a reporter) the Baltimore rioters why they were rioting was like watching a clueless college student trying, but failing, to identify correctly the photo of President Ronald Reagan held up by Jesse Watters on Fox News. The stunning level of ignorance of today’s college students is beyond belief and although Megyn’s intelligence is light years beyond these products of today’s liberal higher education, still in this situation she is stumbling just as badly as they. Both Megyn and the rioters were clueless as to a motive for doing what they were doing. The Baltimore councilman being interviewed blamed it on years of racial oppression and this particular “outburst” was just the latest release of pent up pressure black folks have been suffering from.  He’s got the narrative right, the narrative that says blame all evil behavior on somebody, or usually something, other than the evil heart of a sinner. According to that narrative, if we just gave these disenfranchised young black males better access to the American Dream and quit keeping them confined to their modern equivalent to their former plantation level of squalid living conditions called ghettos today, well then things would be different.  There would be no riots, there would be no black on black murders, there would be no fatherless black homes where black children are being raised by overworked and overstressed black single mothers, or so goes the narrative. “Fix the system” say the purveyors of this worldview and all these behaviors will miraculously disappear.

There is a speck of truth to what the councilman said. There is indeed a double standard in our media and society which fairly labels these black rioters as “violent thugs” (which they are) and unfairly labels white rioters who are celebrating their favorite sports teams’ victories with equal violence as “revelers” or “fans” or “celebrants”, instead of “thugs” (which they are). Here is a site that shows this double standard through photos.  But a speck of truth does not help address the issues and solve the problems if it is outweighed by a ton of greater truth. The greater truth is this – all of us are rebellious sinners who love sin and hate righteousness and the source of righteousness, God Himself.  And we rebellious sinners are controlled by a sinful heart that cannot do anything but smash car windows, burn down CVS pharmacies and loot local liquor stores if we know we will not get caught and suffer no negative consequences. “What?” you protest, saying, “you would never do such things?” Of course you wouldn’t because you love being loved by others as a law abiding respectful person and crave the adoration of man as a law-abiding “decent” person. So what you are saying is your sin is better than the rioters because it is less visible, even though it is still feeding the same basic desires of pleasing yourself, which, by the way, is today’s greatest idol.  That’s why you can’t see yourself in the rioters’ faces, you think you are better, regardless of the fact you share the same root problem as they, a heart bent on pleasing nobody but you.

We as Christians do ourselves a favor by identifying ourselves with the rioters because that’s what we were until Christ changed our wickedly evil hearts and gave us a new heart (2 Corinthians 5:17). Of course we have a new identity now and we live that out in the grace of Christ but we should never ever forget from where we came and from how far we have been lifted out of the pit of our own selfishness. If we do, we will become the next generation of evangelical Pharisees.

There you have it, right from the source. Our evil behavior is not caused by external influences upon us but by a heart that drives us internally to act wickedly for selfish purposes. If we want to change the behavior of a child, think going after his heart, not his behavior.  Paul Tripp in his DVD series “Getting to the Heart of Parenting” rightfully says that using manipulation, threats, or bribery to change a child’s behavior may result in changed behavior but the child will still be unchanged internally. He will still be a lying, deceiving, angry child that is just bribed, manipulated or threatened to keep his sinful behavior under control or to a minimum. Paul uses the illustration of an apple tree that is diseased and producing shriveled, malformed apples. His solution? He went and bought two bushels of Red Delicious apples and stapled them to the branches of the diseased apple tree. For a few weeks it looked great.  He fixed the problem. You know where this is going so I don’t need to continue.  Addressing the behavior of our children without addressing their wicked sinful hearts is like stapling healthy apples to an unhealthy tree. It looks good, for a while.

You may not see yourself in the image of the young black boy above but it may do you good to see your son or daughter in that young man’s face. For that is where all our children will end up if we do not target their hearts.  Paul Tripp, in his excellent DVD series, lists five questions we need to ask our children every time disobedience (heart) raises its ugly head.  Here they are: (think one child hitting another for taking a toy away that belonged to the hitter. . .)

These questions are extremely effective at helping our children get to the source of their conflicts and anger and sin. It will become very apparent to them over time that it is their heart that is the real issue and the sooner they get God’s help in changing their heart the easier it will be for them to live life in the freedom of obedience and away from the bondage of being under the control of an ever-demanding sinful heart. If your family or church family has not yet seen this marvelous biblical and helpful instruction from Paul Tripp, then you are missing out on some of the most important information your family needs to hear. It will be an immediate blessing of peace in your home and an eternal blessing for your children because as you address issues of the heart you are actually preparing the soil of their heart to be soft towards God and his desire to control their internal guidance system (I’m talking conversion here, in case you missed the inference).  The DVD series can be purchased here:

I shepherd the flock of believers called Cornerstone Church in Alexandria, MN, a family integrated Baptist Church and more importantly am married to a fabulous woman named Pati who is grandmother to our 5 wonderful grandchildren, Luke, Wyatt, Brin, Livy and Eleanor (Ellie).
View all posts by Darryl Knappen →
This entry was posted in Child Rearing, Parenting, Racial Oppression and tagged Baltimore riots. Bookmark the permalink.

1 Response to The Baltimore Riots; Racial Oppression? or Lack of Biblical Parenting.