This seems to be the strategy that many churches across the country are taking to take the woman out of the man who has been feminized by the contemporary American church and American style Christianity.  I can’t disagree that most churches in America cater to the female crowd both in music styles (the lyrics of many songs are crossover love songs) and preaching (it’s much too soft) and consequently more and more men feel that they are not welcome in the pews and so stay away. Or even worse, they do come and are further feminized even more than what the culture has already done to them, the culture that constantly encourages them to be wearing panties instead of pants.  Do you doubt my conclusions?  How many churches do you know that post signs on their doors “Guns Are Banned on These Premises” compared to churches that expect most of their men to be licensed to conceal and carry and prefer they do, carry that is.

END_OF_DOCUMENT_TOKEN_TO_BE_REPLACED

How Should Christians Respond When the Supreme Court Votes In Favor of the Constitutionality of Same Sex Marriages? 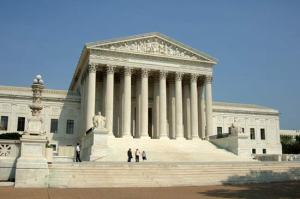 The Supreme Court of the United States (SCOTUS) will be meeting behind closed doors beginning on September 29th for the purpose of discussing petitions from five states concerning their ban on same sex marriages (see full report here http://abcnews.go.com/blogs/politics/2014/09/justices-to-meet-behind-closed-doors-to-discuss-gay-marriage-cases/) . They are doing this because three federal appeals courts have struck down the ban on same sex marriages that the states of Virginia, Utah, Oklahoma, Indiana and Wisconsin and the peoples within those states have voted to place within their state constitutions. At first, this seems like an overzealous judicial minority (these appeal courts have only three judges on each) trying to overturn the will of the majority of the people, and imposing their politically correct view upon the unlearned masses, making their vote to define marriage meaningless. Some would say this is because these justices are mostly Democrat appointed justices and hence might be predisposed to vote in ways similar to the Democratic Party Platform, a platform that has become less and less friendly to the concept of protecting traditional marriage as we know it. That may well be true.

But, it is not as simple as that. In fact, it’s actually quite complicated, both for these appeal court judges and for the Supreme Court justices. For example, one could say it is a matter for the states to decide and leave it there. This makes initial sense since every state has the authority to decide who is allowed to be married in their state, as each states minimum age laws for marriage serves as an example.  But, it used to be the law in many states that two people of different races (for the record, there is only one race, the human race, with only one skin color which is brown in various shades) were not allowed to marry and if they did they could be arrested and spend time in jail.  Those state laws were rightfully overturned by the Supreme Court in Loving v. Virginia in 1967, which may have been an overreach of federal power as many would argue it violated the 10th Amendment which states: “The powers not delegated to the United States by the Constitution, nor prohibited by it to the States, are reserved to the States respectively, or to the people.”

END_OF_DOCUMENT_TOKEN_TO_BE_REPLACED

Is Doing Business with Homosexuals Biblical?

The Rev. Jesse Lee Peterson (find more about his ministry at http://www.bondinfo.org/) a frequent contributor to World Net Daily www.wnd.com wrote a very intriguing article entitled “Christians, Here’s a Solution to ‘Gays’ Suing Your Business”.  He argues that instead of denying access to your product to homosexuals because of your principled belief that homosexual behavior, and same sex marriage is wrong, why not accept their money and give them what they want, whether it be a wedding cake, or photos of their wedding or catering for their reception with this one caveat, you inform them that you will use their money to give to an organization that will lobby against same-sex marriage.  That way, he argues, you can’t be sued and lose your business, especially if it is taken to court and you are appointed a liberal judge to hear your case, and if that happens, you are more than likely to lose.